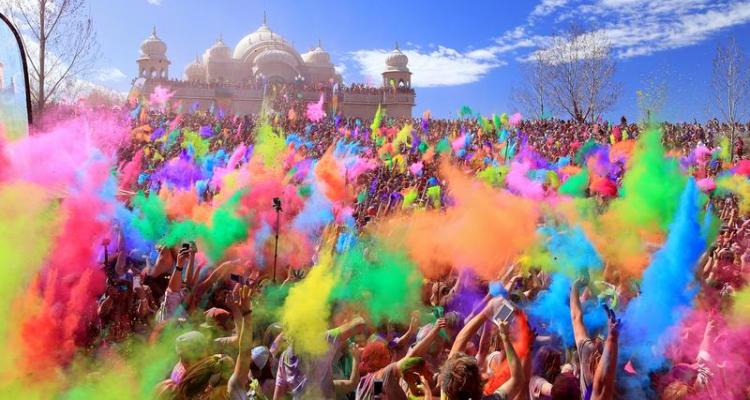 Holi Festival is one of the major festivals in incredible India. Holi Festival is an ancient festival known as “Holika” in India. Meaning of this festival in beginning it was specific rite performed by married woman for well-being and happiness of their family. There are a lot of legends connected with mythology about Holi Festival. It`s Celebrated as the birthday of Shri Chaitanya Mahaprabhu in some places of India, especially in Orissa and Bengal.

Legend of Lord Krishna says that the Lord started this tradition and he play with colours on beloved Radha. People accepted this play that gained popularity and became a tradition. Some other legends are associated with Holi Festival like legends of Ogress Dhundhi and Pootana and Legend of Shiva and Kaamadeva. All of them describe triumph of good over evil. That is the main explanation of this festival.

Holi Festival is celebrated with spirit and enthusiasm on the full moon of March in the month of Phalgun. This festival of love or festival of colours celebrations is popular in other regions of South Asia and also in other communities outside Asia. Holi Festival spread to parts of North America and Europe as a spring celebration of colours, love and frolic.  It`s starting by burning Holika-devil in order to save Prahlad. People are gathering singing and dancing on the night before Holi. The next day in the morning is a free for all carnival of colours.

People chase and colour each other with coloured water and dry powder. You can carry coloured water filled balloons and water guns for your water fight. Everyone and anyone are fair game, children and elders honda, man or woman, rich or poor, friend or stranger. The fight and frolic with colours happen in open parks, open streets, outside buildings and temples.

Some groups are carrying musical instruments and drums go from one place to another, dance and sing. All participants move and visit friends and foes, family, chit-chat and laugh, then share Holi delicacies, drinks and food. Holi Festival can be one of yours unforgettable funny adventures especially if you have your holiday in incredible India during this celebration.